Showdown number three. After running a pretty successful version of Izzet Phoenix deck the day before that the practice had set me up to pilot the deck better. Unfortunately, that wasn’t the case this time. I am still missing a few key parts to fully unlock its potential. Being a Phoenix down isn’t great, they are expensive cards at the moment so I had subbed in Murmuring Mystic as a late-game sub in the hopes that three would be enough to carry the deck. Also using jank cards to replace the three Chat a Courses I was missing may not have been an ideal scenario but adaptation pays dividends in this game apparently.

My previous list had ran Goblin Electromancer, an extremely powerful card when it gets to hang around but I had noticed a lot of people had teched against such things and the fact it can be hit by a one mana shock and be taken out isn’t the best way to trade in at the end of turn two. The plan was a bit more simple this time. Draw, play the cheaper spells that also draw, discard the Phoenix and land massive drakes to finish off the works. 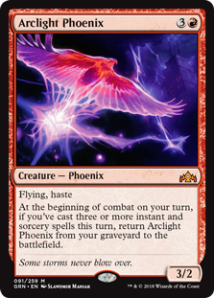 My time with Magic so far maybe brief, but I’ve come to the conclusion that my city has its own play-style. Even after only attending three Standard events and one night of casual, I had been relentlessly smashed by control and to be honest I’m not a fan. Don’t get me wrong, it is fantastically fun to pilot those decks but the long dredge and zero creatures doesn’t appeal to me at all right now. I want to slam creatures down and turn them sideways, not play counter-spells until the other person looks sad they’ve lost the war of attrition. I’ve dubbed this the “EdiMeta” and I’ve set the goal to beat at least one of these control decks in the coming weeks.

The First game was luckily not control and although I maybe realised this slightly too late, it was still high octane. We were both playing Izzet and my opponent had a relatively slower start than myself. The first few turns we were playing lands and I was using cards to cycle through the deck fairly quickly. Around turn five or six, things really started to heat up. The faithful Crackling Drake came down and it was massive. We didn’t even need to count up the size of the thing as my graveyard was fairly stacked already.  One of the Phoenixes had also just arisen, but then things started to go sideways (and not in a good way of swinging for attack). My opponent had been holding out, playing his own Enigma Drake, it was fairly beefy as well but a Lava Coil came down and blasted my Drake out of existence. I’d expected a Lava Coil to come down at some point, most variants of the deck will run a couple to deal with big threats. I’d cleverly decided to cut mine down to one copy as it wasn’t the proactive way I wanted to deal with big threats. This would later be my downfall, but for now, things were still looking alright. We were trading blows back and forth for a while, pitting Phoenixes against each other. The trade-off for this was both our life totals were getting fairly low. I was sitting on around fourteen life whilst my opponent was on an uncomfortable nine. He swung in with all but one Enigma Drake. My life total was on eight. I looked at the board and knew if I could just pull one spell that gave a Drake haste I could take it. After casting my three spells to get two Arclights out the grave my massive Drake could contest his and put him to one life. I had just played my third drake to try and draw into something that would win it. Unfortunately, I topdecked an Island. We laughed about how explosive the decks were and that my I’d maybe hit the go button too fast. I was always behind on card advantage and drawing was becoming increasingly more difficult towards the later stage if I’d noticed the mirror earlier on there was potential to maybe have better tempo on my part. He also had the counter ready for my drake just in case, but his one life would have given him the turn he needed anyway.  If I had maybe slowed my plays down I could have maybe drawn into something a bit better or jump-started a card to find a shock to finish him off. I knew using the drake as a free draw was a risky move but I’m not entirely well versed in the mirror match up just yet. The one copy of Beacon Bolt I was using as removal didn’t really stack up against four lava coils which in the mirror, do so much more work than you’d imagine. 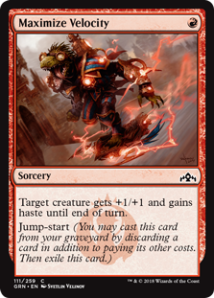 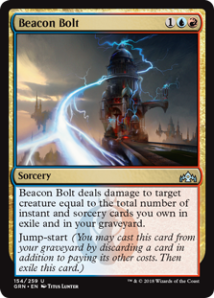 Game two wasn’t the best start or finish for me. I kept an extremely greedy opening hand with just two lands and a lot of draw spells. My opponent had a really good start, discarding two Arclight Phoenix within his first three turns, whilst I was left cycling for lands and trying to answer his big threats. His Drakes were fairly big by turn six as 5/4, and me sitting on three lands being unable to answer just left me wide open. Getting whittled down to around eight or nine life again, I finally found a Phoenix as a blocker but at that point, I was too far behind on tempo and mana. After sideboarding in more late-game finishers I was being far too optimistic on the adaptability of the deck. The control version of this has the ability to do so, running more removals or counter. Being able to add big late-game finishers to your control deck gives you a great win condition, but by doing so here, I’d written my demise, turning my aggro/tempo deck into a poorer iteration of a midrange deck.

Match two I was on the bye, meaning I pick up a free win due to the odd number of players. Although not getting to play the second match was a little disheartening as I was looking to get more practice in, being able to sit back and watch a match was interesting. It was Dimir Surveil vs Boros Angels, and Boros did what it does best and just beat down everything in no time at all. The deck runs an absurd amount of mythics and although they may not be the most synergistic they seem to get the job done. One player had put Adanto Vanguard down and I jokingly remarked: “I’d watch out for that card, it will seriously get some work done”. The other player looked slightly puzzled but the owner laughed and said: “you must have seen this before then”. Adnato is a strange card, it’s a 1/1 for two mana which in any card game is simply a bad deal. Its merits are in the text though, when it attacks it gains +2 attack and the player can pay four life to give it indestructible. He started chipping away for three each turn and Dimir decks take time to ramp up and stabilize unless it gets some early creatures down. Dimir tends to play around hand hating, a term that forces your opponent to discard cards whilst giving yourself card advantage. A great play in most cases but against decks that are just all gas it can be hard to counter everything. Eventually, the Dimir deck got some threats down but at that point, it was too late. Ajani, Adversary of Tyrants had come down alongside a turn three History of Benalia which is almost unstoppable without board wipe. Dimir couldn’t react to the counters and the white dorks pushed through for the win.

The Second match was slightly more even. Dimir got some good early defenders down but Adanto was threatening to push through again. An early Ritual of Soot came down to try and deal with Adanto, but the Boros player happily ended up paying twelve life to keep him around the entire game.  The angels made an appearance with Aurelia, Exemplar of Justice being countered which would have certainly closed it all out. After noticing Boros was tapped out, Dimir was able to flash in Dream Eater; A huge threat that lets you dig through your deck pretty far by surveiling four cards. Unfortunately, Boros was then able to bring in Lyra Dawnbringer, a 5/5 flyer that basically has the word stabilize the board written in a long-winded way. Dream Eater couldn’t really do much and all the work Dimir had put in was effectively torn to shreds by one card. I’d played against the Dimir deck twice before and it’s where I’ve found my wins. It does seem to have some weaknesses but against a deck that is just threat after threat, I did feel pretty sorry for it.

I was back on the table and ready to go. After not seeing what my opponent was playing whilst spectating, I did notice the game was long and they had a lot of lands. It was control and unfortunately, I got trashed by it pretty heavily. There’s really not much to say about these two matches. I was doing my game plan and assuming that it was Jeskai when in actuality it was Esper. My opponent was incredibly gracious, he noticed I had missed a couple of triggers on certain things and was being very helpful but when all was said in done and I thought maybe there was a chance of winning, he flashed in Chormium, The Mutable. I’d seen this card before but after seeing its mana cost I thought it was pretty much unviable, oh how wrong I was. My board was empty, the majority of my deck being in the graveyard or exiled and not a single Phoenix in sight. Chormium managed to finish me off in both occasions, with the first game being long and drawn out. Once he came down a second time alongside a fully stacked Teferi there was nothing left to be done. I conceded graciously and thanked him for his kindness. Once again the “EdiMeta” stifled my plans. My deck didn’t really do what it was planning to in either games and whether that was down to mulligans and opening hands are left to be speculated on. My plan is to try and work around control, although it seems to be pretty dominant in the format at the moment. I’d rather not join them so I’ll maybe try piloting more aggressive decks for now and see how far that takes me. 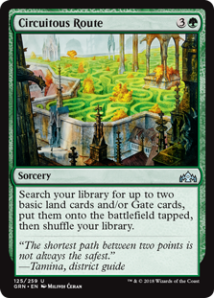 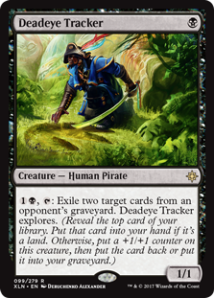 A record of my experience with MTG, from going to tournaments, what decks i'm planning on building, set reviews and gameplay on MTG Arena. View all posts by Tamiyo's Journal